Another sesh on the turbo tonight, much better training and cooler as it was drizzling a bit and helped keep the body temperature down. Chemical Brothers: Dig Your own hole provided the tunes as I put out 15 miles in 30 minutes. Given I only did 10 in 32 minutes in the first session I can quite pleased with progress – further gains will be harder to match.

I thought I would say a few words about the tech. I am using a Wahoo Bluetooth heart rate chest band and one of the combination cadence and speed sensor. Its all Bluetooth 4.0 kit so uses very little energy and isn’t a constant drain like older Bluetooth technology. 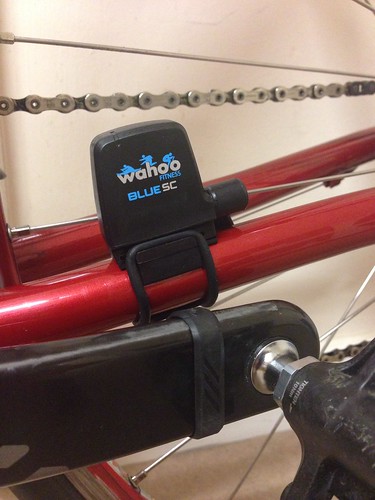 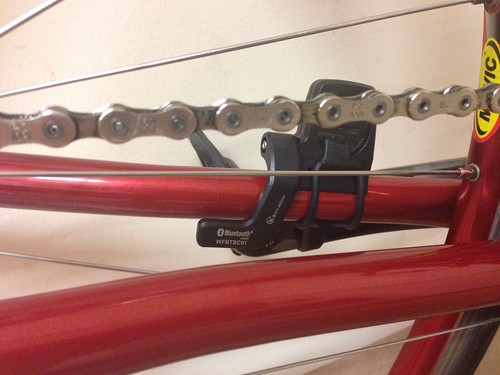 The only limitation I have discovered so far is that the speed sensor seems to reach its limit at just under 50mph, you can sprint as hard as you like, but I am yet to see the magic five-o appear on the screen. In terms of use, just start the Wahoo fitness app on the iPhone do the sesh, then when it’s finised share the work out with Strava and you’re done. The app has a clear simple display showing all the basics.

Pretty pleased with it so far and can’t think of anything I’d change. I stick the phone on a window ledge in front of me when on the turbo in the back yard or in a jersey pocket on a ride. I looked at the Wahoo bike computer, but really don’t think I’d use it and there is no way I am going to bar mount the iPhone. If I had the cash I’d be tempted to bring a Kickr trainer back from a trip to the US. They look awesome, it would be cool to be able to do a virtual training ride up Alpe d’Huez with the turbo constantly varying the resistance along the climb.