I thought I’d close up a great summer of riding on the Scott by heading back to an old stomping ground and riding some of the trails that first introduced me to the Dark Peak. In about 1997 when I moved to Manchester it was one of the first rides I did, back then on a rigid hardtail with 21 gears. Riding into Edale is one of my favourite routes. I parked up in Hayfield and road in over Jacobs Ladder and back via Mount Famine. All was good until about 30 seconds after this photo when I got a pinch puncture. 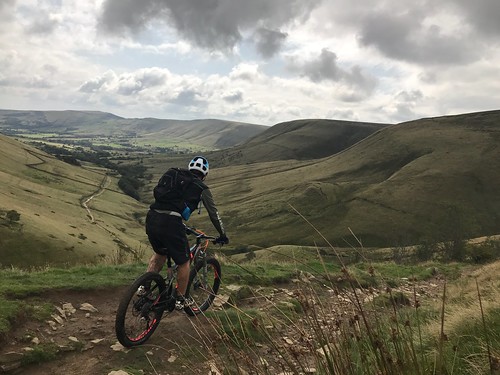 I drew blood on both thumbs trying to unseat the beads of the tyres and then when I eventually did, they then wouldn’t seat properly again. To top it all the patches I put on the tube didn’t stick and ten minutes later I was stopped again this time by the river getting eaten by midges whilst I changed it again. After that I was back on it cleaning the ascent up Chapel Gate and nailing it all the way back to Hayfield. Proper ride.