I’ve rarely written an end of year summary, but 2016 was important because its was really the year I (psychologically speaking) really started riding again. I got back on the bike in April and gradually ramped up the riding and sustained it for the rest of the year. I found a colleague at work who was like minded and we clocked up a good mix of road and off road routes.

As the year closes Strava tells me I’ve clocked up 96 hours riding, covering 2,145km over 147 rides. That’s not to say every ride was recorded often taking the kids to school in the trailer and picking them up again didn’t get captured but sometimes it did. I don’t care about those not being captured. 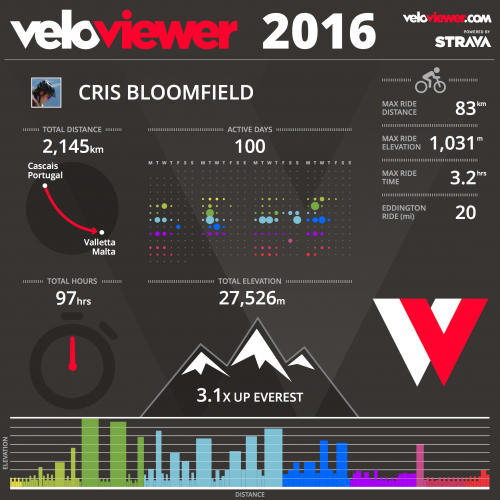 Back in November I rode out with an old friend who I know through Singletrack, Alex Leigh. He introduced me to some decent riding and a pre and post ride drinking culture in the blended edge that exists between the Malverns and the Forest of Dean. It was a highlight of the year. Alex also introduced to relive.cc and have occasionally enjoyed looking at some of the recorded routes.

Last year I reduced bike numbers selling my beautiful IF Planet Cross in Aquamarine fade. I rode all my other bikes over the course of the year, the Remedy has needed some love (and still needs the forks servicing) and the Ti Deluxe too. After well over 2,000km the Ti Crown Jewel needed a new chain and the Singlespeed just ploughed on often with the kids in tow. As winter came I knew it was time for a winter hack. After riding the Ti Deluxe a bit, I decided the sensible solution was another Cross Bike.