I was born and for a significant portion of my life have lived within a short distance of the headquarters of Lotus Cars. The irony is that I have rarely been there and prior today the only ride was at night on a mountain bike. So today’s ride was about setting the record straight. Back in Norfolk for a long weekend with the Ti Crown Jewel, I headed out rode a big loop around the factory (saw a couple of V6 Exiges and Elises), before getting the ride evidence photo by heading down Potash Lane. 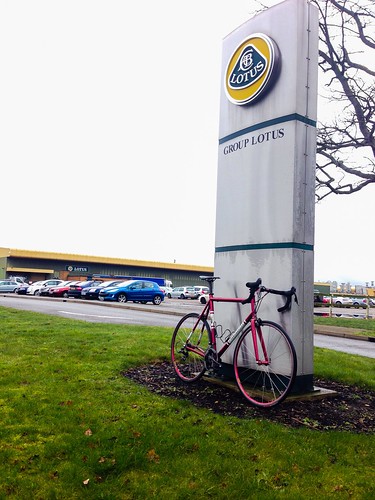 The weather was typical of February, just without the snow. Temperatures hovering about 2 degrees, grey and overcast, wet (but not raining) with a northerly wind to remind you that route planning is important to avoid those long exposed roads that the Norfolk landscape offers. I was testing out some new kit, including these Castelli Toe Warmers, which were fine for about an hour and then once waterlogged were pointless. Proper windproof and waterproof overshoes are still needed, but colour co-ordination with socks was appreciated. 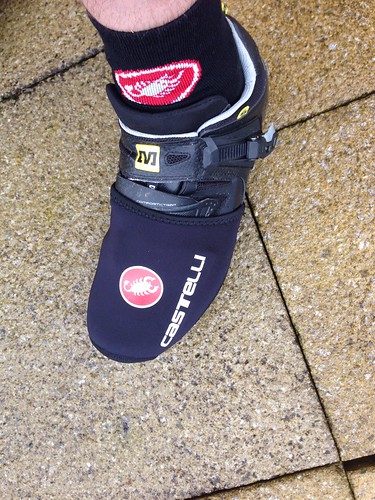 The other product getting a first ride were Assos TK.607 S5 Bib Knickers. I’d decided that after 3 pairs of Endura Thermolite equivalents that I’d go back to Assos, in part because I’d not been overly impressed by the last pair from the British firm: the graphics peeled off the legs after the 3rd wash; fabric lost elasticity; and the leg grippers weren’t wonderful and consequently the fabric has an annoying habit of riding up and bunching behind the knees. I’ve put up with them because for the money when mountain biking you are not going to cry if you bin it and put some extra ventilation in them.

I also have a pair of Rapha ones which came through IF when the two firms were working closely on the Cross Bike project. For pretty much the same money, the Assos ones do seem a more technical garment and do offer a better fit for me. The downside – they’re not as warm as either the Endura or Rapha equivalents, but in all other aspects have impressed so far.

A downside to back road riding this time of year, particularly in my part of rural East Anglia, is that the winter has littered the tarmac with assorted detritus and perhaps inevitably I picked up my first puncture on the Independent Fabrication road bike. I managed to get within half a mile of home before having to concede defeat and stop to pump some more air into the front wheel, which was just enough to get home.